The HiLASE Centre (Institute of Physics of the Czech Academy of Sciences)  is a proud winner of the Visionaries 2021 award, which is given by CzechInno, a non-governmental association supporting Czech innovative entrepreneurship. The aim of the Visionaries project is to recognise leading Czech companies, entrepreneurs, organisations and specific authors of innovative products, processes or services. The Institute of Physics of the CAS was awarded for the activities of its HiLASE centre and its Pulsed Laser for Medical, Industrial and Space Applications (which is currently the most powerful laser in the world) and its technological, economic and social contribution to medicine and industry. 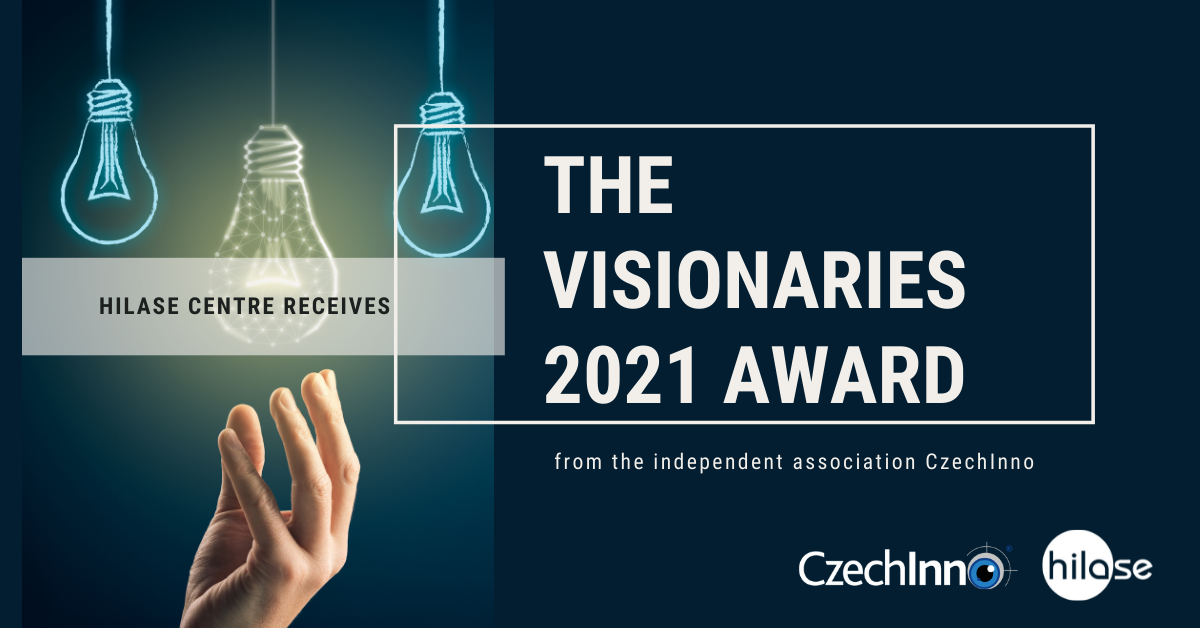 The laser developed by the HiLASE Centre can be used in surgery, lithotripsy (shock wave therapy), industrial machining of organic materials or security applications, as well as for space communication or space debris disposal. Acknowledgements for its development go to our colleagues Martin Smrž, Jaroslav Huynh, Jitka Černohorská and Michael Písařík.

The working wavelength of the laser is 2.1 μm, pulse length << 100 ps. The novelty of the solution lies in the use of a thin Ho:YAG crystal achieving high conversion efficiency of continuous Tm pumping by the fiber laser into ultrashort pulses.

The thin disc technology is very demanding and requires a broad interdisciplinary knowledge of the scientific team; besides the HiLASE Center only a few laboratories in the world have it. In addition, the HiLASE Centre produces its own continuously emitting excitation lasers for this purpose, which have an excellent output beam M2 close to 1 (aprx. 1.3) and an order of magnitude higher brightness W/m2 than diode lasers. The resulting laser is thus highly efficient while reducing the cost of its production.

The HiLASE Centre is currently applying the knowledge gained from the project to other types of disk lasers and is intensively researching applications and commercialisation of disk lasers. The production of thin discs using a new type of direct-saturation technology is well on its way to patenting. The Ho:YAG laser will also be implemented in the optical layer damage threshold measurement station that provides services to optics manufacturers at the HiLASE Centre. We anticipate that the developed thin-disc technology will bring competitive advantage and profits to the local industry, both users and component manufacturers in the future.

The Korean company Axel also participated in the project, growing Ho:YAG single crystals and preparing polished disks and HR/AR layers for the main amplifier. Profiber was involved in the optimization of the fiber parts and the diagnosis of the lasers in the mid-infrared region.

The expert jury also selected the Personality of the Visionaries project for the sixth time. This year it was Tomas Mocek, Ph.D., Head of the HiLASE Centre of the Institute of Physics of the CAS, for his long-term contribution in the field of connecting applied research in the field of laser technologies with the needs of practice.