We are happy to announce that our colleagues Alexander Bulgakov, Yoann Levy, Jiri Beranek, Shiva Nagisetty, Martin Zuckerstein and Nadezhda Bulgakova have recently published an article in the journal of Optics and Laser Technology (Elsevier). The topic of the article was Single-shot selective femtosecond and picosecond infrared laser crystallization of an amorphous Ge/Si multilayer stack. 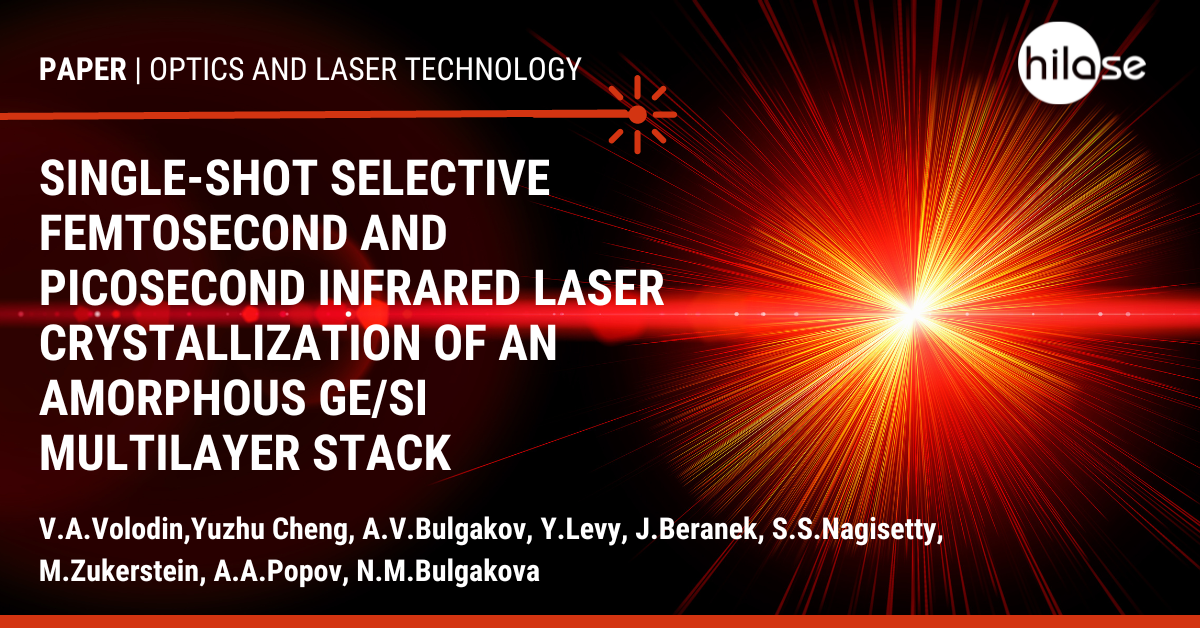 Pulsed laser crystallization is an efficient annealing technique to obtain polycrystalline silicon or germanium films on non-refractory substrates. This is important for creating “flexible electronics” and can also be used to fabricate thin-film solar cells. In this work, near- and mid-infrared femtosecond and picosecond laser pulses were used to crystallize a Ge/Si multilayer stack consisting of alternating amorphous thin films of silicon and germanium. The use of infrared radiation at wavelengths of 1030 and 1500 nm with photon energies lower than the optical absorption edge in amorphous silicon allowed obtaining selective crystallization of germanium layers with a single laser shot. The phase composition of the irradiated stack was investigated by the Raman scattering technique. Several non-ablative regimes of ultrashort-pulse laser crystallization were found, from partial crystallization of germanium without intermixing the Ge/Si layers to complete intermixing of the layers with formation of GexSi1-x solid alloys. The roles of single- and two-photon absorption, thermal and non-thermal (ultrafast) melting processes, and laser-induced stresses in selective pico- and femtosecond laser annealing are discussed. It is concluded that, due to a mismatch of the thermal expansion coefficients between the adjacent stack layers, efficient explosive solid-phase crystallization of the Ge layers is possible at relatively low temperatures, well below the melting point.