Surface functionalisation and micromachining at the HiLASE Centre

We have reached a new record utilizing beam shaping technology!

Scientists from the Laser Micromachining team of the HiLASE Centre developed a unique beam shaping technology for surface functionalization, which allows them to efficiently create nanostructures even on complex 3D materials.

The technology utilizes a Flexible beam shaper (Pulsar Photonics) to shape the beam into an arbitrary shape designed on the PC and unique laser system PERLA.

„Compared to our previous records in nanostructuring, the advantage of this technology lies in the utilization of a spatial light modulator, which allows us to shape the beam into any arbitrary shape and even change the intensity distribution.” says the leader of the Laser Micromachining team Petr Hauschwitz

In the pilot experiment, a periodic nanograting with the detail of < 750 nm was created with the productivity of 900 cm2/min. Such functional nanostructure can serve as a superhydrophobic surface, which can be used for its self-cleaning or heat-conducting properties. More application for these surfaces can be found in the area of protective and decorative holograms, or as an antibacterial surface which repels certain types of bacteria.

“I am proud of this result as we not only demonstrated a 9 times faster nanostructuring speed compared to scientific literature, but we also managed to extend the depth of focus above 15 mm, which significantly simplifies the structuring of warped and complex 3D parts. For example, in our trial experiment, we did not need to compensate for the warped surface of our aluminum sample.” adds Petr Hauschwitz

These results were achieved thanks to the thin-disk laser system PERLA developed by the HiLASE Centre. This laser is also available commercially as a product (PERLA100) and holds two world records: in the number of laser beams simultaneously modifying the material surface and in nanostructuring speed. 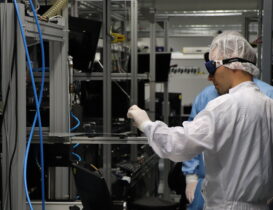 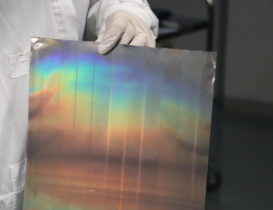 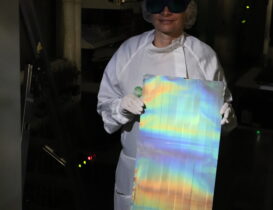