Prof. Alexander Bulgakov, Dr.Sc. and Oleksandr Gatsa, PhD, from HiLASE Centre SLA department have introduced a mass spectrometric system for studies of laser-matter interaction processes. The system was used for example in the experiment of professor Eleanor Campbell and PhD student Elle Bethune from the School of Chemistry of the University of Edinburgh, UK, that was conducted at the HiLASE Centre within the Open Access programme.  Together, they have recently published a paper in the journal Applied Physics A of Springer Nature, where they report on systematic investigations, both experimental and theoretical, of the melting of gold by single femto- and picosecond near-infrared laser pulses. More details. 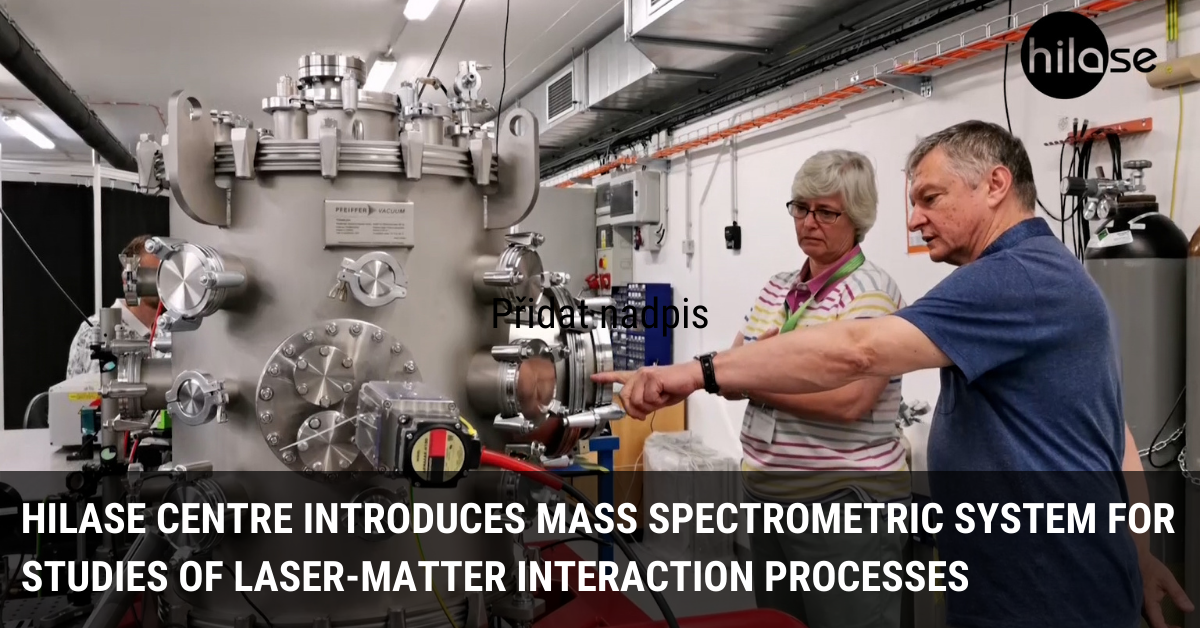 What is the mass spectrometric system?
The system consists of three main parts: large laser ablation vacuum chamber (volume app. 100 l) where laser-induced processes to be studied occur, high-resolution time-of-flight mass spectrometer (TOF MS), an instrument for studying these processes, and an intermediate separately pumped vacuum chamber between the ablation chamber and the MS.

The laser ablation chamber is pumped by a high-speed turbo-molecular pump down to base pressure of 10-7 mbar. The chamber is equipped with a number of optical viewports to introduce laser beams, systems for translating and rotating irradiated targets inside the chamber, optics to focus and scan the laser beams over the target surface, electrical feedthrough, gas inlet systems.  The TOFMS instrument is a high-resolution high sensitivity customized mass spectrometer of Reflectron type specially designed for investigation of laser-ablation plasmas and laser-induced processes in the gas phase (Kore Technology, UK). The main parameter of the MS: mass range 1-20000 Da, mass resolution better than 1000, detection of individual ions. The instrument equipped with two post-ionization techniques, electron gun (variable electron energy in the range 10-200 eV) and an excimer ArF laser (photon energy 6.4 eV). It is equipped with two detectors: a microchannel plate (MCP) detector (detected musses up to 2000 Da) and a high voltage dynode detector for investigation of heavy species (up to 20000 Da). The registration system includes the analogue signal mode and the ion counting mode. The MS is pumped by its own vacuum system down to the base pressure of 10-8 mbar. The intermediate chamber serves as a differentially pumped system and is needed to keep the proper vacuum in the MS (below 10-6 mbar) when ambient gases are introduced into the ablation chamber (up to maximal pressure of 1 mbar).

More specifically, plasmas or individual particles produced by pulsed laser ablation/desorption/excitation are pulse-sampled at a fixed distance from the irradiated sample and transported to the TOF MS for analysis. The sampling is performed by applying high voltage pulses to a system of electrodes (transparent for ions) which push the ions towards the MS drift tube. When analyzing neutral particles, pulsed post ionization (electron impact or photoionization) is used while rejected by a special deflection system to avoid proper plasma ions are rejected to avoid interference of neutral and ion signals. The particle velocity distributions are typically analyzed by varying the delay between the ablation and sampling pulses. For fairly energetic plasma ions, there is also possibility to measure their velocity directly according to their arrival time tote detector. A great advantage of the system is the possibility to detect all the produced ions in one laser pulses. The system also allows to detect low-yield particles or trace ions (when less than one particle is generated during a single laser pulse) using the ion counting mode by accumulating the signal over a large number of pulses.

What can we use it for?
Investigations of laser-produced plasmas and particles allow us to get insights into mechanisms of laser-matter interactions, analyze composition of compound solid samples and gaseous mixtures including detection of trace elements, optimize various laser-based applications such as pulsed laser deposition (PLD), nanoparticle generation, laser-induced forward transfer (LIFT), etc., characterize molecule and NP stability and their reactivity towards various chemical reagents in the gas phase, and search for conditions for generation of novel unexplored nanosystems.

Most of processes in laser-matter interaction include ablation material removal) or desorption/ejection of individual particles. Studies and characterization of the produced particles is one of the key tools for understanding the processes and revealing the ablation/desorption mechanisms. Laser-produced plasmas and particles are used in a variety of applications including pulsed laser deposition (PLD) of thin films, generation of NPs and ion beams, laser printing, structural analysis of nanoobjects and biomolecules, compositional analysis of multicomponent materials, etc. Detailed characterization of the plasma and particles as a function of irradiation conditions is crucial for optimization of these applications. Mass spectrometry in combination with laser excitation is one of the most powerful tools to investigate the stability and reactivity of neutral and charged molecules and NPs in the gas phase. Our systems allow investigating such laser-induced processes as delayed ionization, metastable fragmentation. The availability of the differentially pumped system enables mass spectrometric experiments at fairly high pressure of ambient gases and thus to investigate collisional-induced processes and chemical reactions of laser-produced particles and molecules of ambient gases. High resolution of the MS allows to determine the composition of the reaction products with high accuracy. For instance, we can study reactivity of small particles of gold and platinum, which are not noble at the nanoscale. The combination of laser ablation and mass spectrometry techniques is a very flexible system to follow the laser-produced particles at wide ranges of their generation conditions and at different formation stages thus offering the possibility to search for novel unexplored molecules and NPs. For instance, namely during MS analysis of laser-produced particles such new systems as fullerenes and met-cars were discovered.

The main purpose of this diagnostic system is to investigate the mechanisms of laser-induced processes and to optimize such laser application as PLD, LIFT and NP synthesis. The system has unique possibilities for such kind of research and namely in this field unique world-class results are expected to be obtained. However, more routine experiments like analysis of composition of multi-component samples or gaseous mixtures can be also performed in the frame of Open Access.